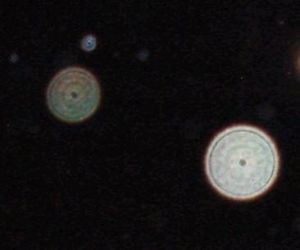 Being part of a diverse paranormal investigation team, like The Spirit Seekers, one can find themselves surrounded by people whose ideas and beliefs vary greatly from their own.

One such area of contention is using “orb” photos as evidentiary support in determining if a place is haunted or not.

The Spirit Seekers, as a group, believe that while a majority of orbs can be explained away as dust, insects or other types of “contamination” there are instances when an orb is a legitimate source of proof. In order to be classified as paranormal an orb must meet the following criteria:

That is not to say that everyone in the group has to believe in orbs.

Personally, I do not believe that any orb is paranormal in nature and I feel they should be discounted completely as evidence. This is in stark contrast to the belief of Alan Lowe, co-founder of the group. But, because we respect each other’s opinions and each other as investigators we have agreed to disagree on this.

Almost immediately after the camera was invented, ghosts began showing up in pictures. Since the advent of the pocket camera with built-in flash, ghost orbs have made their mark on the world. What made the orb so commonplace among paranormal evidence?

The fact that they are anomalies that cannot be seen with the naked eye has almost everything to do with it. Imagine the first time this phenomenon was captured while taking pictures of an allegedly haunted location. The photographer snaps several pictures and everything is normal. Their pictures come back from developing and they are filled with floating balls of light.

Since the location is supposed to be haunted and since he/she did not see any floating balls of light with his/her naked eye, the investigator can only deduce that these manifestations are paranormal and can only be captured through the lens of a camera.

The birth of the orb as paranormal evidence.

The fact that orbs do not show up in pictures taken in daylight where no flash is used should be a clear indicator that the flash is causing the orb.

Let’s not forget that orbs often show up in the lens of video cameras equipped with an IR source or external light source.

Video evidence of floating/flying balls of light seems to lend credibility to the phenomenon of orbs because now they are being caught live on video. No more static photos of phantom lights, now you can see them twirl, bounce and roll in living color.

Fair enough, but let’s use the same example as above. Orbs do not exist in any video footage during the day time where there is no supplemental light source such as infrared being used.

Orbs are simply a byproduct of light reflection off dust in the air or on the lens. Streaking orbs, fluttering orbs and orbs that blink in and out of existence are bugs and other scene contamination. Again, this is simply my own personal opinion.  I am willing to concede that I am wrong if the evidence is ever strong enough to prove it to me. Until I see that concrete piece of evidence I am of the mind frame that all orbs are of natural origin and not supernatural.

By definition, paranormal means “above the normal” or “outside the realm of the norm”.  Since orbs show up so frequently and are common in almost any photograph or video taken at night using a flash or IR/external light source then that means they are “normal” or naturally occurring phenomenon.

Alan, bless his heart as I am sure this very article has caused his blood-pressure to spike, would argue that scientists have determined that energy is spherical. The human body is made up of a mass of energy. Knowing that, the energy of a paranormal manifestation would in fact be round. I am willing to accept this as fact, but in order to believe it I would have to witness this energy manifest itself with my naked eye and not through a lens of a camera or camcorder.

I captured this piece of evidence at an investigation we did recently. It is video footage of a hallway looking into a bathroom. The three investigators and the homeowner were in the living room and nowhere near the camera. We went lights out for an EVP session and after I explained that we do not provoke there is a slow and fluid-like movement of light that is caught in the reflection of a mirror in the hallway.

No one had a flashlight turned on and there was no other IR source anywhere in the house in use other than the camera recording. This was the only anomaly caught on film. Is it an orb? Is it paranormal?

I have no idea what it is. Because we were not looking in that direction we don’t even know if it was something visible to the naked eye. Even when presented with something that was captured on my camera, I am skeptical to say it is paranormal.

I attempted to recreate the event with my camera at home by pointing the camcorder at a mirror to see if I could get a lens flare from the IR source reflecting back at the lense. I did get a flare and it was constant, bright and nothing like this.

I then shined a flashlight at a glass picture frame to see if I could recreate the light intensity and slow fluid like movement of the manifestation and it lit up the entire picture, not just one or two spots.

Is it an orb, a ghost light, or some type of manifestation of a supernatural being?  You tell me, because I sure don’t know, but I know I will not classify it as an orb, because in my mind, orbs don’t exist as proof of the paranormal.