Several years ago I visited a friend of mine who lives in Chicago, IL.  I spent a portion of the trip doing the tourist thing. Going to the Field Museum and the Shedd Aquarium and eating deep dish pizza and Italian Beef sandwiches seemed to fill the bulk of my trip.

One day my friend, who knew I was preoccupied with the paranormal, asked if I had ever heard of Bachelors Grove Cemetery. Surprisingly, this little bit of haunted Americana was never on my radar. He described the history, albeit a bastardized version.

His story involved one of tragedy and loss and was befitting of a haunted location. The truth of the matter is; real life was a bit more mundane than fiction. There was no known tragedy as it turns out. Unless you count the fact that when bachelors Grove was originally settled in 1833 (or 1834, depending upon whom you ask), the name of the town was already taken. Shocking, isn’t it? Bachelors Grove went on to be called Batchelors Grove and on some early topography it is listed as Batchelders Grove.

The graveyard itself was established in 1864, 30 years after the community was settled. Its location is directly across a busy highway (143rd) and sits adjacent to the Rubio woods Forest Preserve, near Midlothian, IL.

There is no direct road access to the cemetery; the roads leading to and from have been removed with the passing of time. Visitors to the preserve must park their vehicles at the Rubio woods parking lot and take a footpath through the winding woods.

Located at the end of the footpath on the right-hand side is a gated fence that leads into the cemetery. To this day, and we are talking almost 8 years ago, I still recall the distinct drop in temperature I felt the moment I crossed the threshold into the cemetery proper.

Immediately my eyes took in the abysmal condition of this 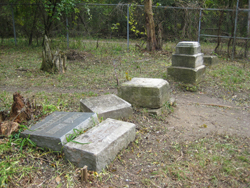 once sacred place. Tombstones lay in ruin, monuments toppled over, the ground sinking in and the grass dry and overgrown. This final resting spot for many souls was terribly neglected.

Traversing the hidden footpath that encircled the cemetery grounds was an obstacle in itself. The remnants of fallen trees, jutting rock that used to be headstones, sinkholes and pits litter the path along with trash left behind from disrespectful visitors.

There is a pond in the back of the cemetery that once may have been a peaceful place to sit and reflect but was now green with mold and stagnant. The cemetery was officially abandoned in 1965 which accounts for its state of disrepair.

Over the years since its abandonment there have been many startling claims of paranormal activity. The obligatory woman in white who is said to seen sitting at the marker of a loved one (or her very own grave) as she looks into her lap apparently reading or praying.  Some say she has a baby in her arms and spends eternity searching for the grave, long since destroyed.

Other apparitions include a two-headed man, a farmer, and several ghostly bodies floating in the pond. Ghost lights and orbs can be seen with the naked eye with a majority of the activity seemingly focused on the far north end of the cemetery by the stagnant pond where it is said the bodies of mob-hit victims were dumped back in the day.

To me at least, the cemetery had a very strong “otherworldly” feeling and my mind was buzzing the entire time I was there. It felt like there were hundreds of people talking at once and the urge to flee became overwhelming.

As I was leaving the cemetery (and the two people I had arrived with) in haste, I saw in the distance an old white farmhouse. I could barely make out any details other than the color and it appeared to be Victorian design.  I lit a cigarette by the front gate and took a few drags to calm myself.  Something within the cemetery was deeply unsettling; to me at least. My partners in curiosity seemed to take their good old-time seemingly oblivious to the feelings of sorrow, dread and panic that had overcome me.

I turned back to look at the old farmhouse, curious as to if anyone lived there and if so, how they managed to get back and forth from their house with no known road access. I looked around but couldn’t find the house.  I paced back and forth eyeing the tree line in search of the white farmhouse that I had seen moments ago as I exited the cemetery.

Unable to find the house again I simply wrote it off as me imagining things.  I tucked that memory away for a long time, convinced that what I had seen was an illusion or it was a real house that I had caught a glimpse of but was not as close as I had thought it was.

Eventually my friends returned, they had grown tired of walking the graveyard and the arrival of a group of rather cliché looking “bad boys” had put us on edge.  Stories of Satanists and occultists performing rituals in the cemetery were not unheard of. Satanic imagery had been spray-painted on several markers in the graveyard, so with the appearance of these gruff looking individuals we graciously bowed out and let them have the run of the place.

We had not experienced any of the fantastic claims that many people have reported. Such as:

The above list of phenomenon was borrowed from www.mysticablaze.com/ghostsillinois/html.

A couple years back I was asked if I would write a piece for a now defunct group back home in Baltimore, MD about my experience at the cemetery.  I had left a comment on their forums at the time indicating that their description of the cemetery as they had it was backwards. They had listed the pond as being in the front of the cemetery to the right of the main gate instead of back and to the left.

I agreed and decided I would do some research and provide a historical background. It was much more in-depth than what I have provided here but I figured if you really want to know the history of the graveyard you can do it yourself.  Google is a wonderful thing.

Researching the history of the area ultimately led to the discussion of the paranormal and I began reading claims of other people’s encounters within the cemetery. It was the usual laundry list of claims:  Lights, cries of despair, horses, cars, women in white, etc.

Amidst the barrage traditional lore one particular post stood out.  It was from a 24-year-old woman who mentioned that while she was waiting for her friends to come out of the graveyard, (she was too scared to go in), she saw a Victorian style farmhouse in the distance but when she walked toward it to get a closer look, it disappeared.

My jaw hit the desk.  I was absolutely flabbergasted as the memory of my experience with seeing a house out in the middle of the woods came flooding back to me. I entered several search terms into my browser search bar and soon found that there have been hundreds of reports of a strange white farmhouse in the area of the cemetery that does not exist.

Of course, there is some sort of legend surrounding this, what shall I call it? Ghost house? Some say that any person who actually has made it to the house and successfully entered has become lost from this world.

I don’t know how much of this is true; I am willing to bet there is no documented case of people simply vanishing after having entered the white farmhouse that doesn’t exist. It would be kind of hard to prove. But still, other people had seen the house and that was an important validation to me that I had seen something that was there one moment then gone the next.

Is Bachelors Grove Cemetery haunted? Keep in mind; I did not do an investigation of the famous paranormal hotspot. I went in as a tourist and left rattled and confused. I was not completely aware anything paranormal had transpired until years later when a fluke article revealed that I had seen the apparition of a home that others had seen but does not exist. 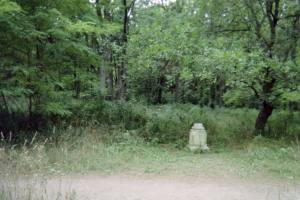 I will tell you this, that one particular incident left me shaken enough that I have not entered another cemetery since.  It was this one incident that put me back on the path of paranormal investigations and ultimately led me to the Spirit Seekers.

One day I would like to face my fears so to speak and head back to the very cemetery that ruined me for all others. I would like to perform an authentic paranormal investigation and see what comes up as far as evidentiary support. Until then I can not say for certain that the cemetery is haunted. I will just have to take the word of other groups that have deemed it so and simply trust in the fact that there is something unexplained happening at this place of unrest. And let’s face it, no one knows exactly what the dead do when they think no one is looking.