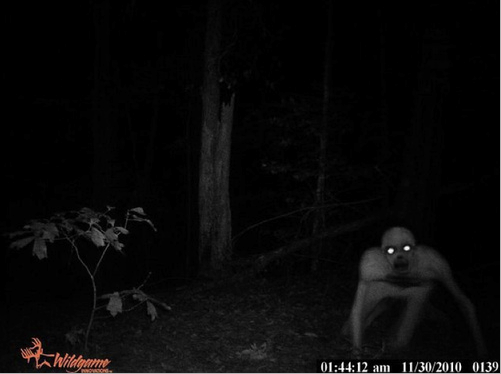 It caught on like wildfire. A picture taken by a deer hunter’s game camera showing remarkable footage of a creepy humanoid figure slinking through the woods, its eyes flashing in the infrared lamp seconds before it darts away. The picture appeared first on a Facebook page for Wildgame Productions and was picked up by the local news affiliate where the story then took on a life of its own until it was all over the internet in almost viral fashion.

That could be what the creators of the photo hoped for all along.

The photo is actually man-made and planted out there by some very crafty men named J.J. Abrams and Steven Spielberg to promote their upcoming alien/monster film “Super 8”.  They are using a very similar style of promotion that lead to the success of Abram’s earlier monster movie “Cloverfield”.

So rest assured, there is no alien intelligent life in Louisiana, at least not any that has been captured on a game camera and ended up spreading across the country at a breakneck pace.

3 thoughts on “INTELLIGENT LIFE? NOT IN LOUISIANA…”