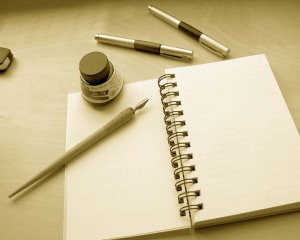 Automatic Writing, also called “Spirit Writing” is yet another means in a long list of means by which the living attempt to communicate with the dead.

Prior to the advent of the voice recorder on which we capture EVP (Electronic Voice Phenomena), technology deficient humans had to capture the voice of the dead in a more primitive manner. They could use a Ouija board to spell out messages from those who have crossed over or they could practice the mysterious art of Spirit Writing.

Spirit writing, the act inviting a spirit to use one’s own hand to scrawl out messages from the other side, is a form of divination akin to the use of Ouija boards and using dowsing rods. The theory is that the spirits of the dead can use the energy in the human body to move objects such as rods, a planchette, or a pencil in the hand of the living host.

We have to look at this concept with a jaundiced eye just as we do with the aforementioned forms of divination. Because a human host is required for these items to work, the method of collecting messages from the other side is already flawed and suspect. There is simply no way to prove that the messages received through divination are indeed those of the spirit world or simply culled from subconscious muscle movements of the person holding the pencil.

What is certain is that a lot of credence was given to this form of communication with several prominent historical figures lending credibility to the act of Spirit Writing. Among them, poet William Butler Yeats and his wife Georgie Hyde-Lees were known to often been in communication with the dead via this method while much later in 1975, a woman named Wendy Hart from Maidenhead, UK made headlines when she claimed to be in communication with a sea Captain named Nicholas Moore who died in 1642.

The method by which one can communicate with the dead using Spirit writing varies depending on which articles on the topic you read. The general means of communication are as follows:

2) Keep a stack of paper handy in the event your spirit is talkative.

3) Grip the pencil or pen lightly in the hand. Many practitioners of Spirit Writing suggest using your non-dominant hand. (If you are right-handed normally, use your left hand to hold the pen/pencil)

4) Gently place the tip of the writing implement onto the blank sheet of paper. Do not apply pressure.

5) Announce that you are opening yourself up to the spirit world and invite clean spirits only to use your hand to communicate.

6) Close your eyes and relax and if contact is made your hand will start moving the pencil across the paper.

Messages may be hard to read or impossible at first. As you practice communication the messages will become clearer and easier to understand.

I have personally tried this method of communication to no avail, so it may not be for everyone, or it may be a load of rubbish. As with any paranormal event, science has created a countering viewpoint. The very act of Spirit Writing (and divination as a whole) could be nothing more than ideomotor effect, defined as a psychological phenomenon wherein a subject makes motions unconsciously. (Wikipedia)

Automatic Writing was often used as part of a seance conducted by early psychics/mediums in the investigations of alleged haunted locations. The act has since fallen out of favor in lieu of more technologically advanced methods of spiritual communications including instrumental trans-communication, which we will cover at a later time.

What say you though, our dear readers? Have you any experience in the practice of automatic writing? What are your feelings on this form of spiritual communication versus other methods?

Share your thoughts on the topic by responding to this post. Or at least have the ghosts do it for you.