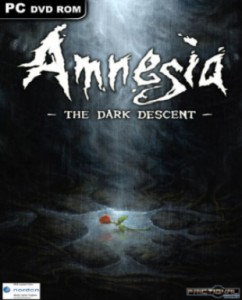 The Skinny:Frictional Games has managed to do the one thing that books and movies in the horror genre have failed to do: Scare the living daylights out of me.

Even as I write this my heart is still hammering in my chest, whipped into a frenzy by the horrifying elements in a video game that manages to pack in more scares, creepy ambiance and jumps than larger commercial releases such as Dead Space.

I want to be perfectly clear, “AMNESIA” is terrifying, this is not a game for kids or for those who do not handle heavy scares well. This is a game that immerses you into a waking nightmare, one that sticks with you long after you turn the game off, and turn it off you will. You can not play this game for long stretches at a time, the suspense and sustained feeling of dread is simply too much to handle.

The game is set in the year 1839 and you take on the role of Daniel, a young Brit who awakens with no memory of who he is or how he ended up in the Prussian castle that serves as the game’s surroundings.

The Good: The game is a simple point and click environmental interaction game and Daniel is armed only with a lantern. It doesn’t take you long to realize that something is not right as distant voices, screams, cries and pleas for mercy are heard and eventually driven aside by the realization that something dangerous is in the castle with you.

Game play involves gathering clues to unravel the mystery of who you are and why you are trapped in this haunted mansion. You can not defeat the monsters that slither in and out of the dark recesses of the screen so don’t bother, your best bet is to run and hide.

Borrowing from “Eternal Darkness: Sanity’s Requiem” the game is equipped with a sanity meter that when depleted by spending too long in the dark, witnessing unsettling events (which there are plenty), and staring at the monsters too long causes the character (you) to hallucinate, hear things and makes you easier target for the games many monsters.

I am sure there is a logical reason for suffering through unimaginable horror, terrifying jump scares, adrenaline-pumping chases and terrifying imagery, but I have yet to discover the reason for the madness.

Horror has never truly existed in a video game until now. “AMNESIA” has paved the way for truly terrifying game play and will be the game by which horror games in the future will be judged.  Just be warned, it is absolutely frightening.

The Bad: None that I can determine yet, aside from the fact that a player can’t spend too long in the world of “AMNESIA” because of the intensity. The game is only available for computer platforms, no console release as of yet. This does create a more intimate experience though, so not really a “bad”.

The Verdict: “AMNESIA” is hands-down one of the scariest games I have ever tried to play. The first person perspective, the helplessness of not being able to defend yourself that is created by the game is oppressive and the fear is genuine and at times too much to handle.  For those who have become desensitized to horror in movies and books, “AMNESIA” is what you have been waiting for.

2 thoughts on “AMNESIA-THE DARK DESCENT: A Review of The Supernatural Video Game Thriller”