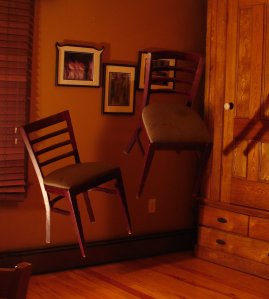 Thanks largely in part to Tobe Hooper and Steven Speilberg, when people hear the word “poltergeist” it immediately conjures images of a young blonde girl perched before her television set and proclaiming, “They’re here.”

In actuality, as scary as many found the film, the actual phenomenon is much more terrifying even if less outlandish than what the film depicts.

To start, we should define exactly what a poltergeist is. In short, it is an amalgamation of two distinct German words: poltern, a verb meaning “to make noise”, and geist, which basically means “spirit”. So poltergeist can literally be translated to “noisy ghost”.

For the most part, that is exactly what a poltergeist haunting typically entails. Rattles, bumps, scratching sounds, footsteps, and moans and groans of indeterminate origin.

You can search YouTube for videos on poltergeist activity and be rewarded with a bevy of amazing clips showing objects moving by themselves: cups sliding across a table, cabinets opening and slamming, drawers sliding open and utensils inexplicably being tossed across the room. It is not uncommon to see chairs sliding across the floor or tipping over. Most, if not all, of the videos are fabrications though created by crafty filmmakers, but do a better job at depicting the true definition of poltergeist activity than the actual film mentioned above.

In addition to the specific physical manifestation of poltergeist activity, it should be noted that the spirit is most often associated as being attached to a particular person or object rather than a location. Families having experienced a poltergeist indicate that even moving to a new location did not stop the activity.

In rare circumstances poltergeist activity has escalated into vicious attacks on an individual within the home. Historically, some of the most well-documented cases of violent poltergeists attacking the living revolve around young girls and teenage women.

The famous Bell Witch legend recounts the story of young Elizabeth Bell, the youngest daughter of the Bell household who became the target of an angry witch spirit. She was shaken, burned and scratched.

In the Enfield poltergeist case of 1977, 11-year-old Janet Hodgson allegedly showed signs of manipulation and possession by a the spirit of a prior tenant of the rented home. Prior to the attacks on Janet, the poltergeist activity was limited to the manipulation of furniture, toys and the requisite knocks, bumps, and moans.

The Amherst Poltergeist case of Esther Cox, a 19-year-old secretary who began being viciously attacked after having survived an attempted rape at gunpoint. The case took place in Amherst, Nova Scotia in 1878 and is perhaps one of the most infamous cases due to the level of violent activity which involved fires and Esther vomiting needles and pins.

In all cases of reported poltergeists, the activity stops as suddenly as it began. Most cases span one to two years before the spirit departs giving the family much-needed peace.

But is activity of this nature supernatural? Science offers many explanations for falling and moving objects. A common belief is that underground rivers, streams, and aquifers cause vibrations that can knock pictures from walls, cause furniture to tip, and cause the sound of moaning.

There is also the belief that paranormal activity of this type stems from the afflicted themself. Most documented cases of poltergeist activity involves troubled youth who are often victims of physical and sexual abuse. That is not to say that the trauma welcomes spirits, the implication is that the victims themselves are causing the activity. They are the ones throwing things and blaming disembodied spirits, they contort their bodies and claw at their skin, and fabricate scenarios as part of a dissociative disorder, similar to the survivor of a violent or sexual crime developing a split personality to disassociate themself from the trauma.

Interestingly, most cases of paranormal activity occurred in the late 19th and early twentieth century and have slowly tapered off over time. Only a small handful of documented cases have occurred in the USA with a majority transpiring in the United Kingdom and other parts of Europe. (source: http://en.wikipedia.org/wiki/Poltergeist#Other_cases)

Not surprisingly, reports of poltergeist activity climbed in the US at the time the film “Poltergeist” was released.

Whatever the case, for those experiencing a poltergeist activity, the situation is real, frightening, and confusing. The fact that there does not seem to be any means of leaving the spirit makes a family feel trapped and seeds of discord begin to bloom.

It is a wide belief in the paranormal field that some negative spirits feed on the energy of distress and grow stronger from it. So perhaps the poltergeist activity is self-sustaining, allowing a mild nuisance ghost to blossom into physical attacks.

Have you had any personal experiences in dealing with a poltergeist? Share your story by leaving a comment. The link to do so is at the top of this article.

7 thoughts on “Make Some Noise: The Poltergeist Phenomenon”